Designed and built in-house from the ground up, AutoPod is invaluable for all live broadcasters. Revolutionise how your listeners can catch up with previously broadcast shows.

AutoPod records your station output 24 hours a day, 7 days a week, automatically transforming your shows into Podcasts based on your schedule and making them available to listeners on your website or in their favourite Podcast app (Such as Apple Podcasts, Google Podcasts, Spotify & More).

No more manually asking presenters to manually record and upload their shows, simply enter your show details, setup the schedule and Podcasts will be created automatically.

Simple for your listeners

Embeddable HTML widgets that you can put in your own website (or share with others) that display your latest shows automatically, and RSS feeds that can be shared to Apple Podcasts, Google Podcasts, Spotify and more.

Unexpected schedule change? no problem, we keep a constant recording of your output (at original quality) and store it for 42 days. Turn past content into a new episode at any time. AutoPod can also be used for OFCOM and FCC compliance recording.

Upload any audio file and turn it into a show for immediate or scheduled release - no need to broadcast on the radio - similar to services such as MixCloud or Captivate.

Each stream and show have their own embeddable content for you to share directly on other websites, episodes have links for social media & direct sharing. The content below is pulled directly from AutoPod – Click on any episode to launch the AutoPod Player! 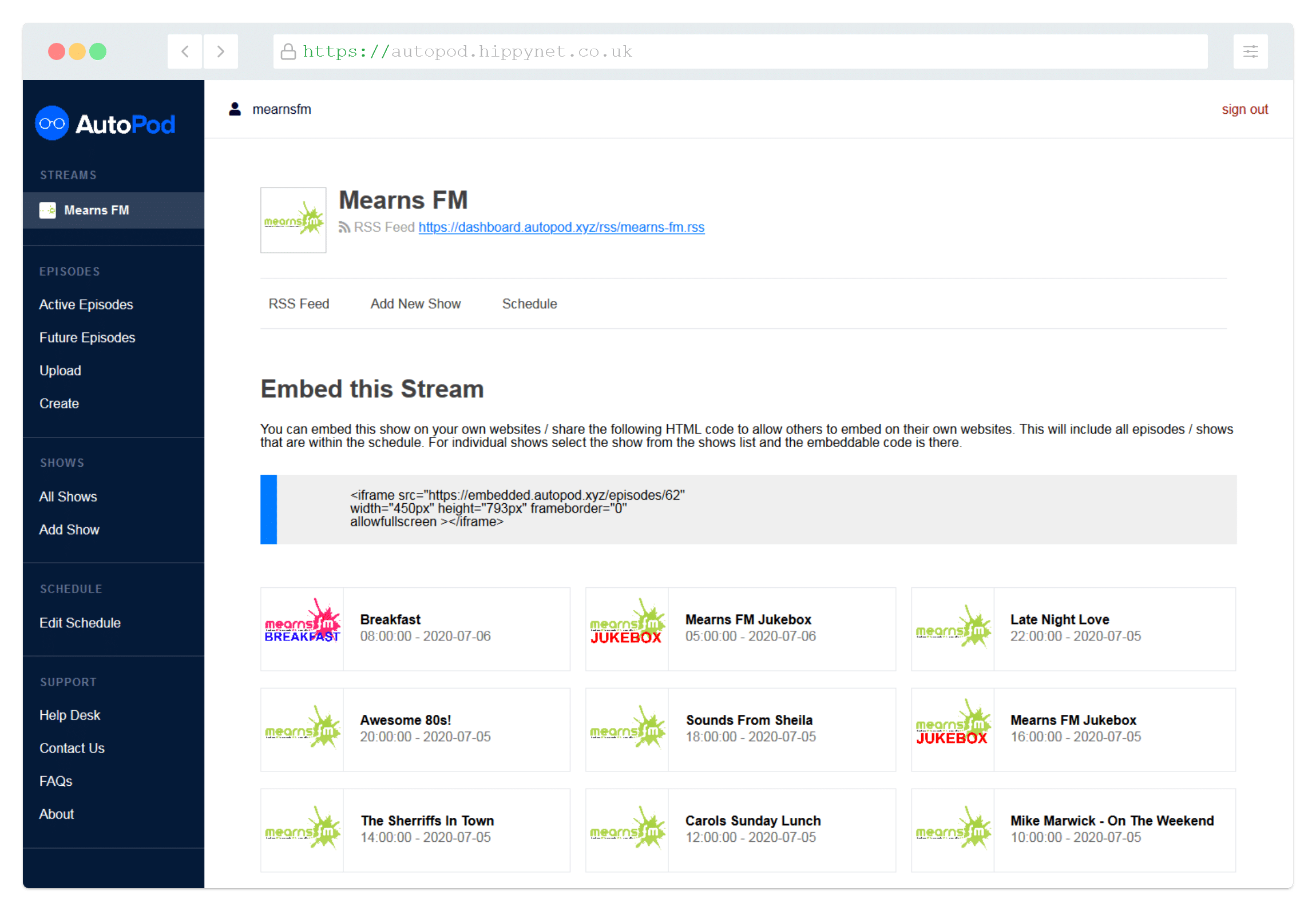 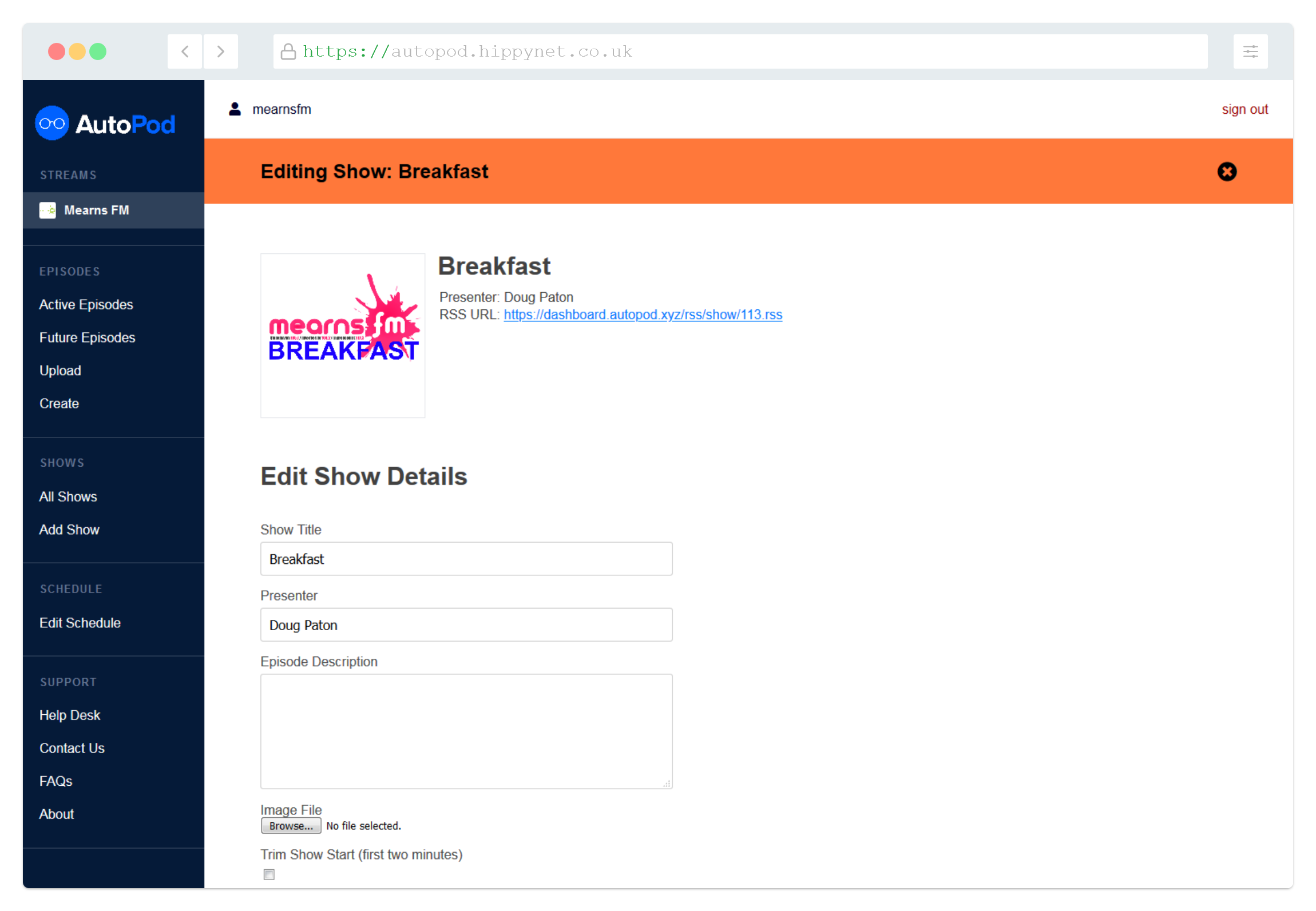 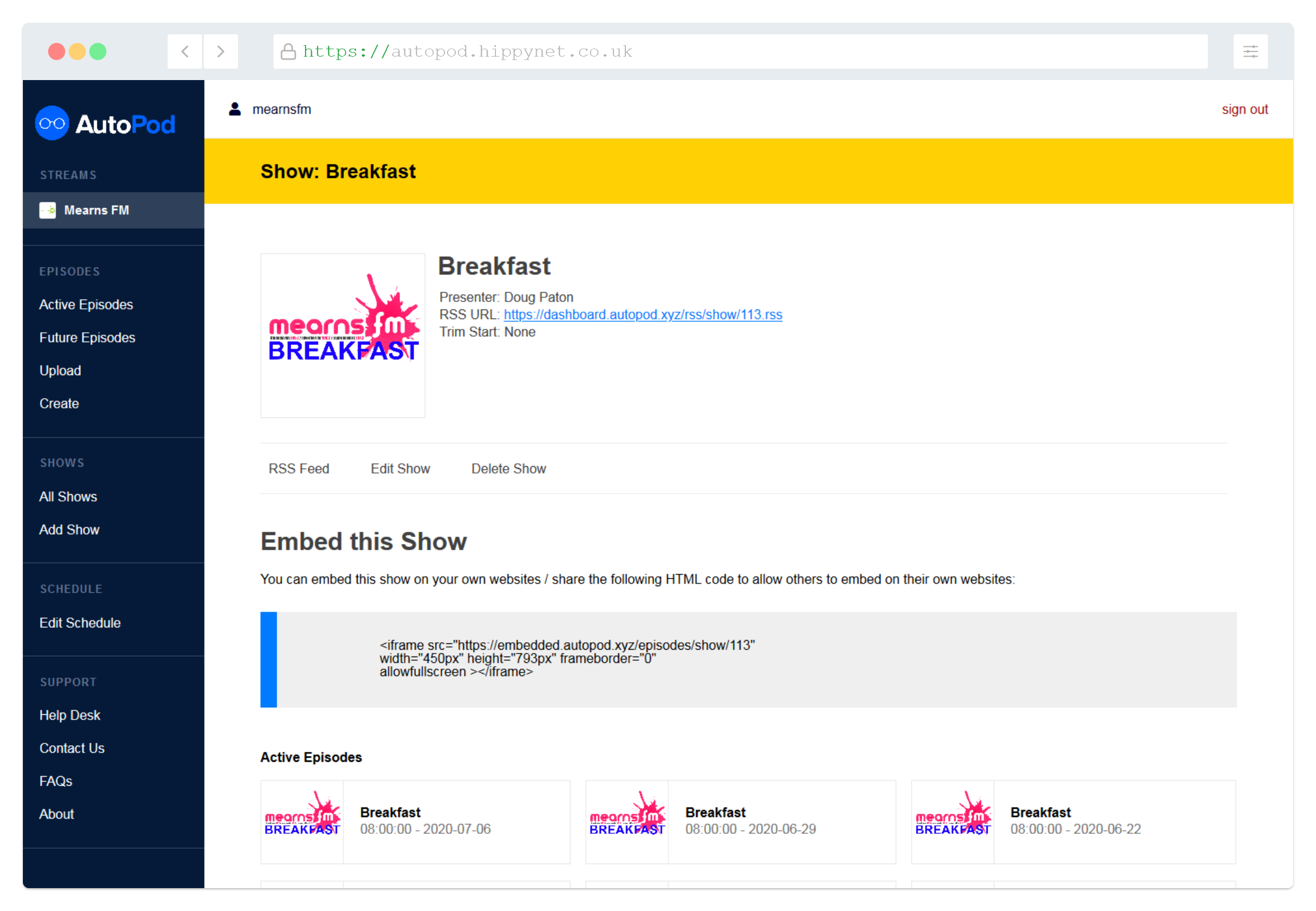 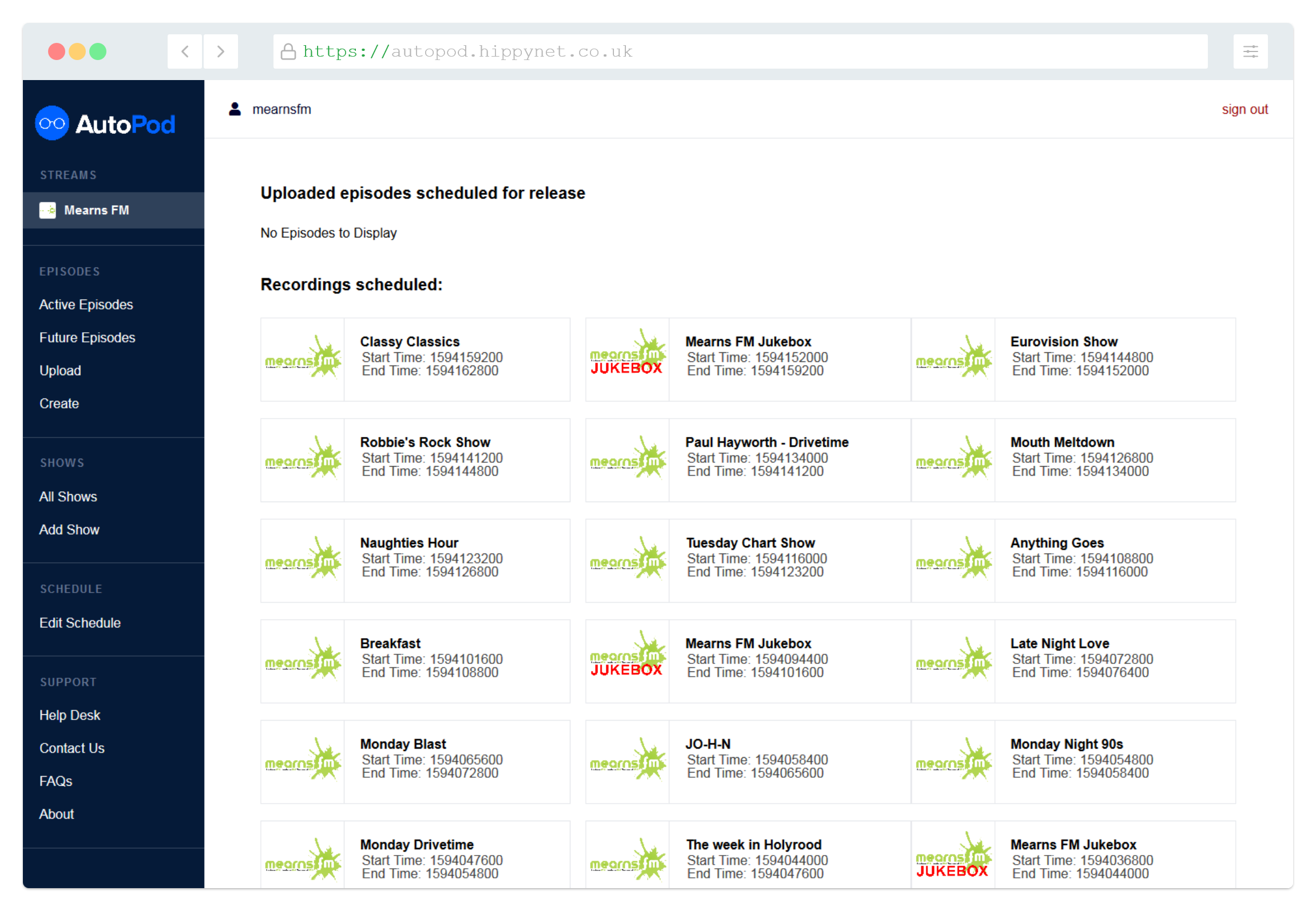 Embeddable search widget so your listeners can find all your shows.

Each show added to AutoPod gets its own unique RSS feed. This feed can be shared anywhere that supports RSS allowing you to extend the features of the system beyond those that we have even thought of. One great example being automatically posting shows to Social Media when they are created using a service like ‘Zapier’ or installing software on your own computer to automatically download every episode that is generated (so you can keep for as long as you like). We even have some members using the service to automatically add shows back into their play-out system so that they don’t have to manually add repeat episodes to the schedule.

Allow presenters / producers to access and edit their own shows, download their own content and get all the relevant bits and pieces they need, without giving them access to ‘administrative’ features such as editing the schedule for the whole station. You are fully in control of their accounts and can delete / change them as needed.

The simplified dashboard can be configured with any number of shows. Have a presenter who is also a producer for another show? give them access to both etc. We’ve found that this feature is nice for presenters who also like to download a copy of their own content, without having to bother you for the Station Output Logs!

All tiers of AutoPod have the same functionality, the only difference being the amount of time that content is made publically available

Pricing does not include the costs of any external licensing requirements for content. These must be obtained / managed by individuals – in much the same way that we mange our Stream Hosting, providing a platform for content but not owners of the content itself

The dashboard is the central management point of the system, allowing you to administer shows, make changes to the schedule, change information/add new imagery to episodes and all other administrative tasks.

Here you can see a list of all episodes that have been generated, gather shareable links for the content you have made.

When you embed widgets in your own websites episodes will always open in the AutoPod player. This player is hosted on our servers and it will show the episode image, title, broadcast time and have basic controls for the control of media playback. Limited keyboard shortcuts are also supported ‘space bar’ for play/pause and left/right arrows to jump forward / backward in 30 second increments.

Shows
A show is a container for a group of episodes. A show would be something such as “Drive Time”. Shows are added to the weekly schedule to allow AutoPod to automatically generate individual episodes.

Episodes
An episode is an single instance of broadcasted / pre-recorded content. It has audio associated with it and other information can be assigned. An episode belongs to a Show and inherits infomation from a show if individual episode descriptions and titles have not been set. If an episode was part of the show “Drive Time” it would by default have a title such as “Drive Time – [Date of Broadcast]”. Episodes can be created in three different means.

Manually added episodes can be scheduled for immediate release (with the time of the episode set in the past) or in the future. Episodes that are scheduled for the future will automatically become available as soon as the time they are scheduled for is reached. Therefore, it is also possible to add a group of episodes for release at specific times – e.g. say that you have an online exclusive series in 6 parts, each part can be added as an individual episode and then scheduled for release whenever you wanted, this could be all at once or at 21:00 every Friday evening for the next 6 weeks.

Schedule: The schedule is an assignable grid in increments of 15 minutes representing the overall show allocation for your station. This is the main source of information for the creation of episodes. The schedule will not update episodes that are generated for “the current day” as individual recordings are scheduled for the whole day at midnight. This has mainly been to prevent situations where the schedule changes whilst a show is being generated. You can edit the schedule for the day after the current day.

We use cookies to ensure that we give you the best experience on our website. If you continue to use this site we will assume that you are happy with it.Ok